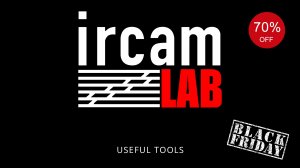 Get Ircam's "TS" Time Stretching app, and the best tuner ever, "The Snail", for Black Friday today !


IRCAM Lab "TS" stands for "Transpose/Stretching" and is a powerful stand alone software application that revolutionizes the way audio signals can be processed.

This technology offers amazing results even when used to transpose or stretch audio waveforms radically. It is able to transpose and/or pitch a WAV or AIFF audio file with extremely accurate results and minimal artifacts making it possible to process professional recordings with transparent results. A life saver for audio engineers and broadcast technicians!


The Snail offers a new way of tuning and analyzing an instrument in an extremely accurate way, displaying intonation and visualizing music and sounds in a way that can help anyone improve their listening and intonation!

It will help you to be in perfect tune and will show you with complete accuracy if the intonation of your instrument is as good as you thought. It is being repriced as there are new exciting products coming from Ircam Lab that will complement the Snail.

Cool Stuff Going On at ircamLab 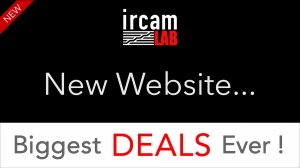 We have exciting information about ircamLab today, so you know what’s going on here in the company.

Today we are proud to announce that the web team at our sister company Plugivery.com have been hard at work these past months and years, developing an amazing new system that allows us to build original websites such as the one you are currently visiting. The site will improve in design as we finalize our media database with more visual content, videos, SoundCloud audio demos, and much more...

Don't tell anyone but a hot new product is almost ready to launch. We should announce it in the next couple of weeks. The secret code name is "TS PRO" but shhhhhhh, right ;-)

To celebrate the official launch of the new ircamLab website, we've decided to run an attractive promo, exclusively here on the store, through September 30, 2019.

Check out the Deals !

Quick to respond to calls for new features from our customers, we've just added "dual channel input support" in our latest 1.2.10, available on our Downloads Page. So, you can now plug in two sources, left and right, and monitor, view and analyze your tuning for both channels (1 and 2) independently. This is a great feature and one much requested by those using such instruments as the Chapman Stick with stereo output. 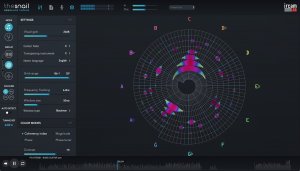 IRCAMLab Update 'The Snail' to version 1.2.8 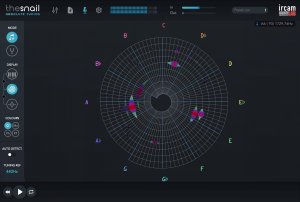 There is a new version of The Snail!

The new 1.2.8 version from Ircam corrects some GUI details to make the SNAIL even easier to use. The incorrect initialization of the intensity color mode has been fixed, and a GUI Plugin UI animation getting stuck occasionally on project reloading.

The exciting news is there is a new function where you can click on the new icon which resembles a snowflake and 'freeze the display' so you can easily see how far or close you are in your tuning of an instrument or pre-recorded track.

So, you will no longer have to play the same note over and over. Or loop a section of music to be able to see how far it is from the tuning you want.